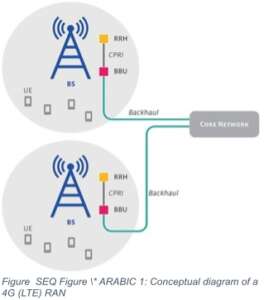 that are provided by either the network provider or by 3rd party over the top (OTT) service providers like Microsoft, Netflix, Face

care of packet-switched data only. That packet-switched core has since evolved into the current EPC (Evolved Packet Core) that takes care of all services, “voice” and “data” alike. But let’s focus on the RAN here.

The RAN concept was introduced by 3GPP at the beginning of the 3G era (late 1990’s), to differentiate it from the 2G-era “BSS” equivalent. In the 2G era, what we now call (3G, 4G or 5G) RAN was called the BSS or Base Station Sub-system. The BSS consists of the (2G) BTS (Base Transceiver Station) and the BSC (Base Station Controller).

With the introduction of 3G WCDMA, the 2G BTS was renamed to NodeB, and the 2G BSC to RNC (Radio Network Controller). In 4G LTE (long Term Evolution), the NodeB was renamed to eNodeB and – at least conceptually and logically – divided into an RRH (Remote Radio Head) and a BBU (Base Band Unit) – refer to Figure 1.

There is ample confusion and ambiguity surrounding certain often-used (and abused) Radio Access Network (RAN) terminology and acronyms like: 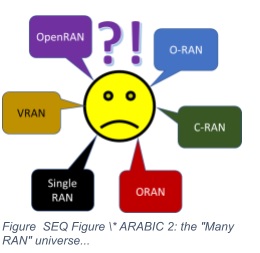 These five terms are often muddled and some of them are used interchangeably, which easily leads to misunderstandings and confusion. Here, we’ll first explain the intended meaning of those terms and then take a slightly deeper explanatory dive into selected concepts and their meaning.

Open RAN – with a whitespace – which is often denoted by the “ORAN” acronym to make things confusing, is a reference to the O-RAN Alliance’s publication of numerous RAN architecture specifications. Those “ORAN” specifications are the Alliance’s core theme and a foundation in its mission to offer an open architecture in the RAN ecosystem.

Open RAN standards are complimentary to and compatible with standards promoted by 3GPP and other industry standards organizations.

The term “OpenRAN” refers to the OpenRAN Telecom Infra Project (OpenRAN TIP). The OpenRAN project group was created to focus on developing a vendor-neutral hardware and software-defined technology based on open interfaces, like those defined by O-RAN with the Open RAN (ORAN) framework.

OpenRAN’s mission is to accelerate development, innovation and commercialization of multi-vendor interoperable products and solutions in the RAN domain that readily integrate in the operator’s network and are verified (interoperability) to work for different deployment scenarios.

OpenRAN is therefore focusing on the implementation – in SW and HW – of the open RAN standards developed (the “how”) by initiatives like Open RAN (the “what”).

VRAN or v-RAN refers to the concept of Virtualized RAN. This virtualization has the following attributes:

The term VRAN is strongly associated with 5G networks because it is expected or assumed that 5G networks will require virtualization to support the use cases and performance requirements of 5G in a resource- and cost-effective manner.

C-RAN or Cloud RAN or Centralized RAN (a misnomer) denotes a Virtualized RAN (VRAN) designed to be cloud-native (CN). CRAN – Cloud-native VRAN and it is therefore by default, virtualized. It incorporates key cloud-native attributes such as micro services and containerization.

Figure 3 illustrates how the five different RAN terms fit together and how they can – but not necessarily do – overlap. 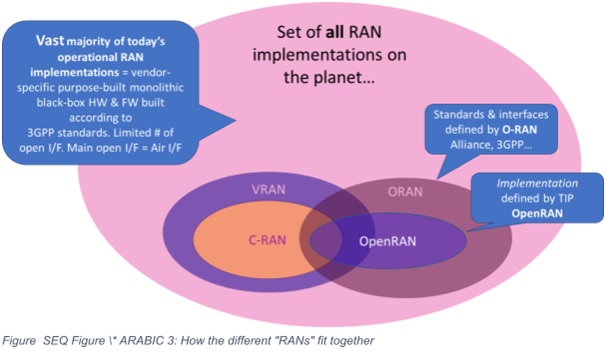 The terms ORAN and VRAN are often used in conjunction with each other, and sometimes confused. In fact, they represent different concepts altogether. ORAN prescribes standardized, open interfaces between well-defined constituent components of the (5G) RAN. VRAN is just one of the possible implementations of those constituent components and (ORAN or proprietary) interfaces.

It is therefore possible to have (also refer to Figure 3), for instance:

ORAN is about subdividing a base transceiver station (BTS) – and more specifically a 5G BTS or gNodeB (gNB) – into three parts and introducing one new network function, with open interfaces defined between these four functional parts.

The BTS (gNB) is split into a Radio Unit (RU), which is a radio transceiver, a Distributed Unit (DU) for L1 computing and real-time (RT) L2 computing and a Centralized Unit (CU), for non-real-time (NRT) L2 and L3 computing. Refer to Figure 4.

As the name suggests, such a split enables the centralization of CUs relative to the cell sites and DUs, whereas DUs can be more distributed and even remain at cell sites.

A CU can control DUs in an 80 km radius and maintain a low latency in the order of 1 ms. The 5G core may be located up to 200 km away from the CU. 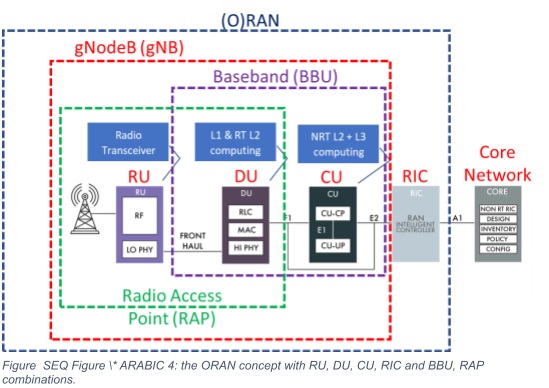 Traditionally, in for example 4G, we lumped the CU and DU together as a “Baseband” function or Base Band Unit (BBU) – refer to Figure 4. Furthermore, RU and DU can be combined into a Radio Access Point (RAP), which is customary in mmWave (typically small cell) 5GNR (5G New Radio) implementations.

The new network element in ORAN is the RAN Intelligent Controller (RIC), which adds a sort of open API into the RAN and can run AI/ML to make the RAN more intelligent, as the name suggests.

The ORAN open interfaces between the RU, DU, CU, RAP (DU + CU), RIC and towards the outside world are – refer to Figure 5:

As many operators are keen to leverage ORAN by combining RUs from supplier A with DUs and CUs from supplier B, the openness of the front-hauling interface of eCPRI7-2 is typically of greatest

The meaning of the frequently used (RAN) terms fronthaul, midhaul and backhaul in 4G and 5G respectively is elucidated in the following figure:

VRAN implies that the baseband functions, such as L1, L2, L3 and transport processing, or at least some of them, are run on top of General-Purpose Processors (GPP, such as x86 processors), inside a commercial off-the-shelf (COTS) computing platform. Traditionally, RAN baseband processing has utilized purpose-built hardware with ASICs (Application Specific Integrated Circuits).

We can distinguish two different levels or phases in RAN virtualization:

Note that the Radio Unit (RU) does not lend itself to virtualization. It is primarily a radio transmitter and receiver (transceiver) and an analogue device, with radio frequency amplifiers, waveguides, filters, AD/DA converters.

A RAN is the access part of a 3G, 4G or 5G cellular radio access network. It takes care of primarily the air interface between the mobile terminal / handset and the core network.

There (5G) RAN terminology can be rather confusing, as very similar terms have different and, in certain contexts, overlapping meanings. It’s therefore of paramount importance that we stick to the intended meaning of RAN terms and take due note of the context where they are used.

Certain baseband processing and networking parts of the 5G RAN – the DU and CU in particular – lend themselves well to (network function) virtualization (NFV): they can be implemented as software on top of COTS hardware or inside private or public clouds. This opens the door to combining and virtualizing multiple hitherto discrete network functions, like for example the DU and a Cell Site Router (CSR) and run them off the same hardware, which in turn holds the promise of substantial cost savings.

Be the first to comment on "RAN, ORAN, VRAN, CRAN and OpenRAN – What Is This ALL About?"