Numerous test automation technologies have emerged to cover the testing needs, as mobile development becomes more mainstream. We will discuss a few of the most well-liked frameworks for testing website for iOS smartphones, including their features, risks or weaknesses, strengths, and test coverage options.

So here we go on the ride to discover the frameworks that made testing heaven.

This tool is the best one to find your problems and then show you why those problems have happened. For the bugs that did not appear on your own devices, we use Bugfender to solve the problem. Earlier to solve this problem we need to get access physically to the device that is affected, or to describe it then you need users. Bugfender will log constantly, which helps to fetch more and more information for the developer- it gives a complete view of the performance of the application. It has the feature of a remote web console which allows drilling any specific user, devices, and locations.

It is the best choice if you are looking for a test solution that is mobile friendly be it android or iOS.

Appium describes itself as an open-source test automation framework for use with native and mobile web apps and is supported by the OpenJS Foundation. It utilizes the WebDriver protocol to drive programs on iOS, Android, and Windows.

Create unit tests for your Xcode applications using the XCTest framework, which perfectly complements Xcode’s testing process. Tests make claims about the fulfillment of particular conditions during code execution, and if those claims are not true, they record test failures (with optional warnings). Additionally, tests can evaluate the performance of code blocks to look for performance regressions and can interact with the UI of an application to confirm user interaction flows.

Calabash is a system for automated testing of native and hybrid Android and iOS applications.

Calabash was created first by Xamarin, which is now a part of Microsoft, and made available as open source in April 2017. A maintainer is currently wanted for the project.

We must implement continuous integration procedures in order to produce native mobile applications at a high rate, which implies we must rely less on manual quality assurance. Detox checks your mobile application while it is active on a genuine device or in a simulator, interacting with it exactly as a real user would.

Keep It Functional: It is somewhat like the XCUI test, this framework is designed to test the user interface. As it is way connected to Xcode, it has various benefits like it automatically integrates with the projects of Xcode, which reduces your problems to use any additional web server or would even not let you burden up your memory by adding any more packages. Setting up KIF is way easy. All you need to do is to add a KIF pod to your project if XCTests has already been set up. It is even faster than the XC tools. The second best thing about KIF is that it is realistic.

This iOS native UI automation test framework called EarlGrey makes it possible to create tests that are simple and to the point.

You can take advantage of more advanced synchronization options using the EarlGrey framework. Although EarlGrey synchronizes with the user interface, network requests, and other queues automatically, you can still manually implement specific timings if necessary.

In order to construct stub objects for your iOS app, OCMock offers a framework. It is available as a static library for iOS development or as a framework for OS X development.

The free test automation framework for testing apps on Apple devices is called XCUItest. As an addition to the unit testing and framework for XCTest, the business released XCUITtest. The framework comes pre-installed with the Xcode IDE; it is not necessary to download it separately.

Because XCUITest is specifically geared for iOS UI testing, the framework excels at completing the task. XCUITest can run tests swiftly, dependably, and steadily because of its emphasis. All of the newest iOS UI enhancements are immediately supported by XCUItest.

A low-code test automation framework for iOS and Android is called Repeato. It was created with consideration for test stability and test engineer expertise. Without coding, tests may be recorded in a short period of time. They may then be modified and stored in a library. On a CI/CD server, a test may be carelessly executed on a Mac, Windows, or individually or in batches.

It is a Selenium and Appium-based framework for iOS testing. This framework is the jack of all trades because it is fairly good for  Android, API testing, and web testing as well. Testproject is simpler as it will require you to have only two things – a developer account for Apple for any of the physical devices, Xcode and macOS for simulators, and a test project agent.

Kobiton is leading the industry in mobile test automation. Kobiton has two script flows one is script-based and scriptless. Scriptless is highly scalable because of its manual execute and capture approach. This feature makes it run once and test anywhere. Script-based takes the script of Appium and then without any difficult scripting, you can inject NOVA’s assertions.

It doesn’t need any code, it is a heterogeneous test automation solution. You can test your application with a few clicks only. It has an easy-to-use interface and you can run your complete code without even writing any single code. It has a feature of Avo Assure, which helps you in making test cases and test plans which help you understand where exactly you are in the complete process. It has a feature named smart scheduling which helps you to implement many test cases in one VM.

What iOS Testing Framework Should You Use?

The iOS testing framework may come into play depending on your requirements and prior experience with other languages. Programmers who work on production software might be drawn to Xcode tools that support their chosen language, but programmers who work on test automation might be more attracted to tools that have a Selenium-like user interface and support Ruby or Python. To choose which framework is suitable for you, some tester creators might need to test each one.

In any case, the market is currently developed enough that there is a framework available that meets the needs of almost everyone and performs a wide range of tasks, whether you simply need to automate testing service calls in iOS or you want to run UI tests simultaneously across various mobile and web platforms.

iOS application testing is made easy with LambdaTest, a cloud-based platform. With LambdaTest, app testers can accelerate their release cycles with a reliable, scalable, secure Appium test execution cloud. Using emulators, simulators, and real device clouds, you can also perform usability testing of your application. Additionally, you can access any device directly from your desktop browser. With Appium and XCUITest, you can automate iOS testing for free. 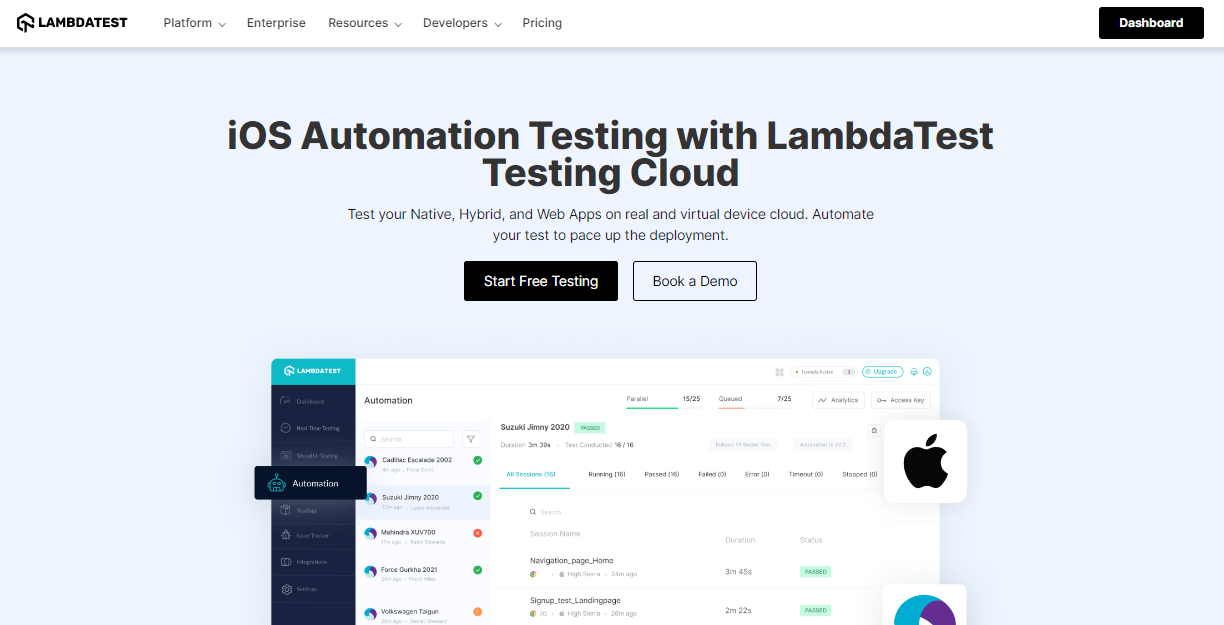 Be the first to comment on "Top 13 iOS Testing Framework"